Well,… I’m safely home and back to work, and I haven’t had 5 minutes to write anything until now.  I’m going to do a very quick wrap up of the last few days of Autodesk University, so bear with me.  I left off on Wednesday night, so….

Thursday morning was the big class.  This is the one I had been preparing for nearly since coming home from AU2014.  I proposed the idea to the Expert Elites in January, and worked on the format and content starting in roughly February, along with the help of some very talented individuals.  I would like to publicly thank Katinka Sante, Katie Harris, Phil Schmelzer and Discussion_Admin (the man with no name) from Autodesk.  Blair Stunder, Mike Davis and Charles Berteaux from the Expert Elite group deserve many thanks as well for preparing content and presenting as members of our panel.  The Power of the Autodesk Community went very well in the presentation of it.  We all felt very comfortable, and had fun with it.  I like to think the audience enjoyed the presentation as well, though I have yet to see any survey results.  After completing this class, I felt a load off and decided to relax the rest of the day.

Now, that doesn’t mean doing nothing… I still attended several classes.  The mental strain was off though, no longer having to worry about my presentation.  There was a lot of good information still to be absorbed.  Lunch was a special Expert Elite Summit kickoff lunch down on the lower level of the Sands Expo, with special guest Amar Hanspal, Autodesk SVP of Products.  Amar gave us a straight forward version of the Autodesk vision for the future and answered some of our questions.  Sorry, can’t share anything he said.

I did take some time off in the afternoon to pay one final visit to the exhibit hall, and say goodbye to some of the Autodesk and AUGI team members who were preparing to start tearing down the exhibits.  I know I won’t see some of these people until next November, other than online.  After some goodbyes, I took my pack up to my room and decided to relax until the closing party.  Since I had already heard Amar at lunch, I skipped the Closing Session.  Instead I sat in my room and did some online Christmas Shopping (I’m WAY behind!).  At one point I heard a strange rumbling from outside, I looked out and saw this on the street below:

I apologize for the quality, I took it with my phone, the only camera nearby… from about 16 stories up.  This was the end of the NASCAR parade on the strip.  Even from that far up with the AC running in my room, I could hear and almost feel those engines.  Pretty cool, even though I’m not a race fan.

So,… later I met up with Mike D. and we took the bus over the the Hard Rock for the closing party.  Words do not suffice to describe the madness.  Nearly the entire lower level of the hotel was set aside for the party, including many of the bars & restaurants and the entire pool area.  Bash to the Future was the theme.  Confusing since it had nothing to do with the movie.  Everything was very futuristic looking, however, and there may have been some Star Wars themes….

I loved the way the Storm Troopers were having so much fun, out on the town.  Mike and I actually spent a lot of our time in the Casino, watching the Detroit Lions try very hard to figure out a way to lose to the Green Bay Packers.  Here is a picture that made every muscle in my body hurt.  This woman was posing in the most inhuman positions… it hurt to watch.

So, after hanging out, walking around and seeing the sights of the party for a little over 1 1/2 hours, we decided to head back for the night.  We still had one more day to go, and we were fairly exhausted already.  Lightweight… I know.

Friday came way too early.  This was the day most people were packing up and heading home.  I had one more day of meetings, the Expert Elite Global Summit.  It started with breakfast and ran until mid afternoon with talks from Autodeskers, and one on one meetings with product managers.  It was a rough day, I was not feeling well, possibly something I ate at the party the night before?  Hard to tell.  After the meetings, I headed straight up to my room, packed and went to bed.  I had to be at the airport at 5 am the next morning and I wanted to get a decent night’s sleep.

Out the door dark and early the next morning and off to the airport for my journey back to reality.  I was about to have one more AU experience, however.  One that I didn’t expect but which turned out to be one of the weeks high points.  In the airport I ran into two people who are Autodesk Community managers in their countries, and we ended up sitting down to breakfast together.  Lena Talkhina from Ufa, Russia and Tarek Khodr from Germany.  To me, this was a perfect example af what the Autodesk Community represents.  The three of us sat there, no borders between us, and enjoyed coffee, juice and some breakfast sandwiches like old freinds.  It will remain one of my favorite memories from what was, by far, the best AU yet.  (Lena took a picture… as soon as she shares it I will add it to this post).

As promised, here is the picture:

10 hours later, I was back home and unpacking all of my swag.  Another great AU in the books,…. time to start planning next year! 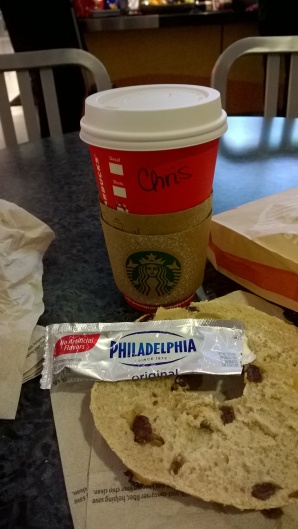 Yes, I placed this here,... the link is safe! Take a look at Product Design & Manufacturing Collection on the Autodesk Subscription Website. Any purchases made from this link will help to support Cad Tips Tricks & Workarounds. Thank you!

A photo journal of my interests from one extreme to the other.